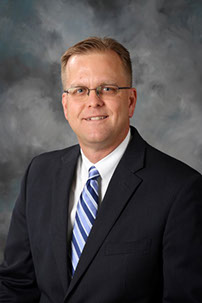 Ed Deters has been practicing law for over twenty years.  Ed graduated from St. Anthony High School in Effingham and attended Quincy University graduating with a Bachelors Degree in History in 1988.  After working for two years at Sherwin Williams distribution center, Ed returned to law school and graduated with honors from John Marshall Law School in Chicago in 1993.

After graduation, Ed went to work in the Peoria County State’s Attorney’s Office as an Assistant State’s Attorney.  While there, Ed started in the traffic division before moving on to the felony division handling all types of serious cases, including many murder cases.  Gaining valuable experience for seven years, Ed decided to run for State’s Attorney in Effingham County in the 2000 election.

At the age of thirty-four, Ed was first elected State’s Attorney in 2000, then reelected in 2004 and 2008, becoming Effingham County’s first three term elected prosecutor in over fifty years.  As State’s Attorney, Ed worked to earn the respect of the legal community as a prosecutor who was always willing to take even tough cases to trial.  Ed tried many cases, and served as the County’s attorney at County Board hearings and in civil matters in court as well.  Twelve years as State’s Attorney brought Ed a wide array of legal experience he now plans to utilize for his clients.

Choosing not to run for a fourth term, Ed joined forces with friends and local attorneys David McDevitt, Kirsten Osteen and Chad Chojnicki to form McDevitt, Osteen, Chojnicki & Deters, LLC.  A fresh new career in private practice has Ed excited to be offering his legal services to clients in Effingham County and all of Central Illinois.

Ed and his wife, Denise, reside in Effingham with their four children.